The choir went to see "Vulnerable", a performance of Roberto Oliván, whom we've met while working together in the production SS. After the performance Marc and Roberto had a correspondence. First comes Marc's e-mail, then Roberto's reply. 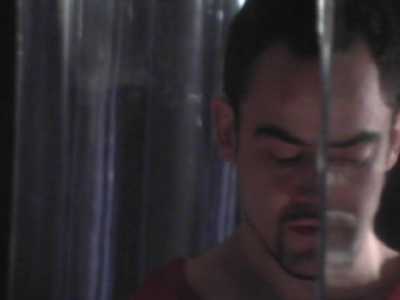 Yesterday, we went to see Vulnerable in the Biekorf in Bruges. Congratulations, we enjoyed it very much! Not only did we see the well-known body-and-mind Roberto, using his every muscle and every facial expression to convey ideas, but we actually heard you speak... aloud! I must confess that this sounded kind of strange and unexpected at first, breaking the spell of the silent performer we knew from SS. (In SS, other people were responsible for a whole lot of speaking aloud). But, no surprise, you really had something to tell, and you did not avoid exposing this vulnerable side of yourself.

Anyhow, the non-speaking parts of Vulnerable did, once again, make their usual lasting impression. The way you are able to evoke situations, express feelings, convey thoughts with your body! I wish I could acquire some tiny bits of this art. Of course, we are, all of us, displaying body language all the time, even at these higher latitudes. But being able to use that faculty consciously would certainly assist us in living a richer life, a life that is more truthful. (I hate to think it can be used to become a better liar; I don't believe this really works, if only because there is no such thing as "a good lie").

Talking of lies. People who succeed in successfully hiding their vulnerability, are they really invulnerable? Perhaps they are. After all, as long as Achilles was able to hide his heel, he was invulnerable, wasn't he? Should we aspire to this stiff-upper-lip, steady-as-a-rock attitude? Or should we, lesser gods, stay humble and accept our weaknesses, trying to live with it, showing our vulnerability when it arises? I am sure I prefer the latter attitude. If anything, at least we remain agreeable and pleasant company.

By the way, how do you call this kind of performance? A one-man-show? A dance act? While we were waiting at the entrance before the performance began, two young people stopped by, asking me what was to be seen inside. I started an awkward explanation, inadvertently dropping the word "dance". This at first won them over, but the rest of my words quickly offset that advantage.

An arena with sand (in Spanish you need only one word for both), where a guy moves about in the middle of flashing scenes from his memory, side-stepping occasionally in a small transparent entrance hall which acts as a cage/temple/confessional/home. All the while you are spreading around thoughts, emotions, visions on the theme "vulnerability". The metaphors are nice, too: the lamp-hourglass, the thought-balloons, the goldfish. I am I could keep discovering more allusions. But the best part of it is the public part, I mean the way you succeed to involve the audience. Without noticing, the audience is part of the performance. Not only are the people helping you to get dressed, they are displaying their weaknesses, their clumsiness, their shame and their inability to cope with these feelings.

Until now, I have avoided the word "time" - you did not, it is perhaps the most frequently used word in the show. Time is one of the great mysteries of nature, and, true, time is our largest vulnerability, because we seem unable to reverse time. At the same time (!), this is a blessing, otherwise we would be reversing it all the time (!) leaving no time to really live. And, to be sure, to the best of the current state of science, time is relative, time is ego-centred. This means that, just like everyone of us is the real centre of the universe, our very own "now" is also the real midpoint of all time. So let us make the best of that.

Roberto, we enjoyed the performance very much, for several reasons. It is always nice to see you and have a drink on the Eiermarkt afterwards, it is encouraging to see how little effort it really takes to dance around for hours, but most of all, the production was a very nice experience, leaving one with food for thought. The very thing that makes life interesting - apart from having fun, of course.

PS. Thank you for working with us in the preparation of the "Koor van het Jaar"-contest. You even attended the finals, you who hadn't heard how a choir sounded until last year. I am sure we will stay in contact.

Maybe I could just start by asking why I am dancing on a stage for people that most of the time I don't know? Good question. But no so easy answer.

I discovered not so long ago that I hate to perform for people and to not see them anymore after the bowing. On the other hand I realised that I like to share moments and emotions with people. If I experience one of those incredible moments-present that life is giving to us when I am alone, I feel a bit sad. And it's because I would love to share it with others.

As you see already now I am trying to share things with all of you again! But there is a reason: when I am at the other side of the stage and it's me the one who receives the information, I feel privileged. Why? Probably because it is a warm feeling to be invited to sit at the sofa behind other people's eyes. It is something like... Come! come! I am going to show you another way of looking at that landscape!

Picasso said once that we all know that art isn't truth. Art is a lie that helps us understand truth.

Sometimes I suppose we do things by instinct. INSTINCT! Such a beautiful behave. It's magic. Let's say we develop our own identity by just doing what we really want to do.

Probably I am just trying to understand the world in which we live in. I have hunger for knowledge.

But let's talk about "Vulnerable". I would like to say about it that I find it extremely beautiful to see someone trying to communicate something. That person is building a bridge towards us. And we have to just build the other half to reach the hands of that person. Are we ready for that? Or are we too busy on ourselves that we cannot even see that intention?

That's what I tried. I just invented a situation to bring people along together in the same room for about one hour. And to tell them about all those things that I've seen and felt lately. What do I expect from that?... I don't really know. That's a mystery. A very charming mystery. The only thing I can tell for sure is that I feel extremely happy when somebody tells me...you know? I understood what you saw or said.

I like to dream and to fight for things I believe in. I could never be passive seeing things developing in a way I don't like around me. Probably performing is my way of being political. It's a need of my own nature. And to tell people about certain thoughts and emotions, or visions and dreams, is my way of hoping that world can still change for better. I really believe so.

When I was a teenager I was running a marathon very often. I got some prizes in competitions. I still feel I am part of a marathon. The longest one. And it takes a lot of sweat and effort to reach the objective. Vulnerability can only happen when one single individual shows his/her weak point. But by showing the own vulnerability to other people maybe can help to understand that we are all the same. So we can put down our fences and play the game in another level much more honest.

In this sort of ...one-man show...contemporary dance performance...physical theatre...or whatever you want to call it, I want to go back to certain almost forgotten forms of expression. It is a very close approach (physical and emotional) to people. I want to be able to look at their eyes. And them to look at mine. So we can establish a kind of dialogue, as anyone does with his own friends. Face to face. A very detailed conversation.

I just wanted to remind that small things and private individual thoughts are also very important. And they can stimulate very warm feelings deep inside every one of us.

That's my personal marathon. It's a very patient and slow act. But very overwhelming when getting to the final line.

Thanks for all this time we had together GMK! Very special. You know it.

Hope to see you soon anywhere in this small world.